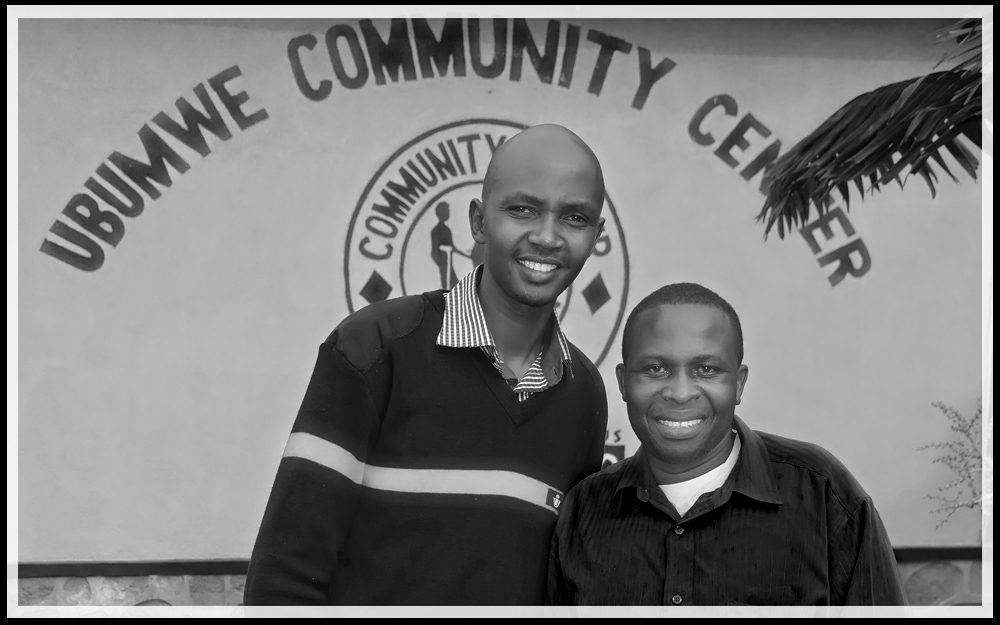 The Rwandan genocide ended in 1994, but pockets of resistance still lingered for years. In 1999, a fifteen-year-old Rwandan boy, Frederick Ndabaramiye, was dragged from a bus and brutally attacked by Interahamwe rebels. When he refused to kill 18 fellow passengers, the rebels hacked off Frederick’s hands with machetes and left him for dead.

After a year in the hospital, Frederick was placed at the Imbabazi, an orphanage started by American expatriate Rosamond Carr in the aftermath of the genocide. Most of Frederick’s family had been slaughtered and his mother, who survived, did not have the resources to care for him after he lost both of his hands. Frederick met Zacharie Dusingizimana, a young teacher, at the orphanage.

Not willing to remain captive to hate and anger, Frederick and Zacharie turned toward forgiveness and action. Feeling lucky to be alive, they wanted to help those like themselves. Partially due to the genocide, Rwanda has a disproportionate number of physically and mentally disabled people and most are only able to beg in the street.

With the support of the Columbus Zoo’s Partners In Conservation and Jack Hanna, Frederick and Zacharie founded the Ubumwe Community Center as a place where these people are given alternatives, where they can be educated, receive skills training, and ultimately generate a sustainable income for themselves and their families.

Today Frederick and Zacharie speak internationally and are mentors to young people everywhere. They teach that a disability of spirit is far worse than a disability of the body. Frederick models his triumph over physical limitations through his painting, his love of life, and his fearlessness.

A census carried out by the Rwandan ministry of Local Government in 2002 indicated that a total of 1,074,017 people were killed in the 100 days of the 1994 genocide. This census details names of the dead, dwelling place, age, and how they were killed. Thousands more were maimed or mutilated as rebel attacks continued for a few years after the 1994 genocide. More than 300,000 children were separated from their families or orphaned. Rwanda, a small, landlocked nation in Central Africa, was one of the poorest and most underdeveloped nations in the world just after the genocide. In the new Rwanda Economic Update (REU), the World Bank projects an economic growth rate of 7.4% in 2015 and 7.6% in 2016. With the projected growth rates, the World Bank projects Rwanda’s poverty rate to decline from 63% in 2011 to 54% in 2016, thus moving approximately one million people out of poverty.

The genocide dramatically impacted Rwanda’s education system. Almost one-third of primary schools were destroyed and over 3.000 teachers were lost. Since 1994 there have been extensive governmental and international efforts to rebuild the country and its education system. This was critical for the development of the country and its future economic survival, but the challenges remained overwhelming and opportunities were extremely limited. According to a survey conducted by the United Nations, just after the 1994 genocide, fewer than 60% of the population age six and over had a primary education, 3.9% a secondary school education, and only 2% a college education. The level of education one has is often seen as a form of capital accumulation which aids a country’s development. The Rwandan government has implemented policies to ensure there is a high literacy rate among the population. As of 2004-2008, 77% of males and females are literate, which is a relatively high percentage, however, those who continue to secondary schooling remains at only 31%.

The number of Rwandans admitted into schools increased between 2001 and 2008, but the facilities and resources have not increased at the same rate. Enrollment in primary school almost doubled over the decade, with an average annual growth rate of 5.4% between 1998 and 2009, totaling nearly 2.2 million students by 2008.